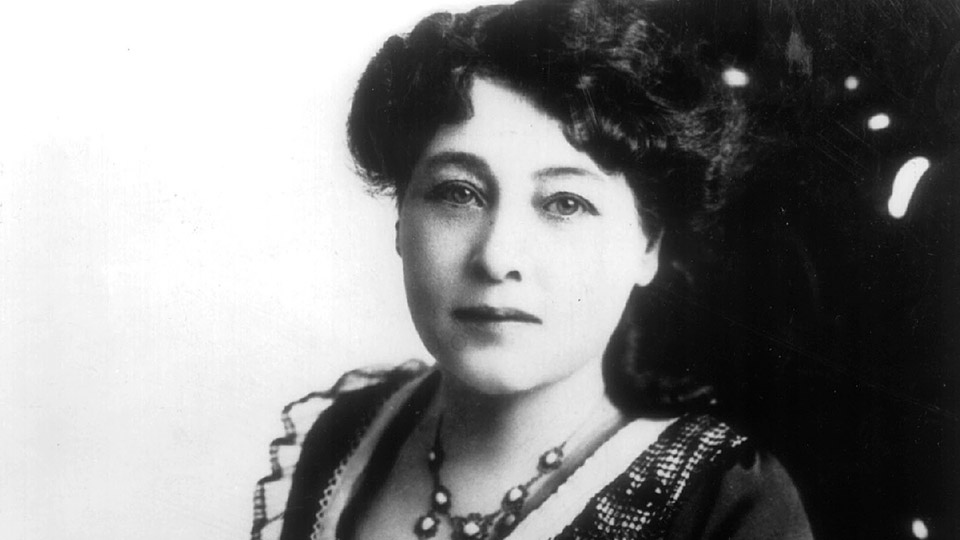 Let me introduce Alice Guy-Blaché, the first female filmmaker in history, who directed, produced and supervised about 1,000 films. As was customary at the time, a lot of her films were short and very few were preserved.

Born 1873 in France, Guy-Blaché trained as typist and stenographer after her father’s death in 1891 to support herself and her widowed mother. That led to her being hired by a camera manufacturing and photography supply company in 1894. When the company changed hands in 1895 and became L. Gaumont et Cie, she stayed on as an employee.

Soon after, Guy-Blaché attended a screening of Lumières “Workers Leaving the Lumière Factory” together with Leon Gaumont, the new head of the company. She didn’t like the idea that film was only used to capture real events for scientific or promotional purposes, she thought it was boring. She was confident that she could extend the usage of film to incorporate fictional elements, and with Gaumont’s permission, she started to experiment. Driven by her passion for storytelling, Guy-Blaché saw a potential for film that others had not seen before.

The result of those experiments was her first film, “La Fée aux Choux” (The Cabbage Fairy), arguably the world’s very first narrative film. The 1896 version of the film has been lost, and Guy-Blaché reshot the film twice. All three versions refer to an old and popular French (and actually, European) fairy tale in which baby boys are born in cabbages, and baby girls are born in roses.

Guy-Blaché moved on to become Gaumont’s head of production. She was probably the only female filmmaker from 1896 to 1906, and is considered to be the first filmmaker ever to systematically develop narrative filmmaking.

This film from 1906 shows how progressive her ideas would be even today. In “Les resultats du feminisme” Guy-Blaché portraits the relationship between men and women in a way that made me think we need more directors like her!

She also did some groundbreaking work on sound and experimented with colours in film.

In 1907, Alice married the young cinematographer Herbert Blaché, whom she met on set. When he was sent to the U.S. to promote a Chronophone franchise, she resigned from her position in the company to join her husband. They subsequently handled operations for Gaumont in the U.S. until 1910 when they formed their own company, The Solax Company, the largest pre-Hollywood studio in America.

Her work influenced some of the greatest filmmakers of all time. Hitchcock named her in his memoirs, there are references to Eisenstein being inspired by her films, and she and her husband gave Lois Weber the opportunity to direct her first film.

Her credo, which was written in large letters for all actors visible in her company, was ‘Be Natural’. When other filmmakers of the time heeded the mantra ‘posing for the picture’ the performances in Guy-Blaché’s films showed a naturalness, which still captures the attention of audiences today. Have a look at “Falling Leaves” she directed in 1912:

In 1918 her husband moved to Los Angeles with a younger actress and Guy-Blaché moved into an apartment in New York City. Furthermore, Solax and the rest of the East Coast film industry in Fort Lee rapidly declined through financial burdens and the growth of motion-picture facilities in Hollywood. Solax went bankrupt.

Guy-Blaché almost died in 1919 from the Spanish influenza she contracted on the set of ‘Tarnished Reputations’, which was to be her last film.

When the bankruptcy proceedings of Solax and her divorce were finalised in 1922, she returned to France with her two children. Her efforts to find work in the French film industry were unsuccessful and she returned to the States in 1927 in order to try to locate copies of her films to help her find work. Unfortunately the systematic preservation of films had not yet begun at that point, so she was not able to locate a single one.

When the silent film era ended in 1929, it became apparent that she would not be making films again. By then, the male domination in cinema had pushed out most women filmmakers of the early stages. Movie making had developed into a money generating business which women traditionally had a hard time breaking into.

Alice ended up financially dependent on her children.

Her films and her contribution had been long lost in history, her known films contributed wrongly to male directors, her name erased, until in 1954 her work was rediscovered, and slowly she started receiving the recognition her work deserved.

Alice Guy-Blaché died in 1968 at the age of ninety-four. It wasn’t until after her death that most records were set straight. In 1975 it was still assumed too expensive, and her work too ordinary, to make it available to the public. Even today, her name is not as well known as those of her male peers. Share this post if you think that needs to change.

If you have links to her movies you think everyone should watch, post them in the comments section.

Be Natural: The Untold Story of Alice Guy-Blaché (Documentary)